Ep 2: Learning to Re-Parent Ourselves 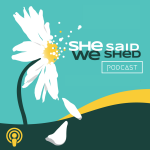 Season 1
Ep 2: Learning to Re-Parent Ourselves

A replay from Aja’s second public discussion on Black Mama Trauma. Aja’s healing work is specifically related to her relationship with her mother and that’s what’s being discussed today. She’s going to go from just having a conversation about it to really having this massive movement around legacy shifting related to Black mama trauma. Has it been dominant in her life? She says it has.

She grew up without a father and with a single mom who was her primary caretaker and thus formed her view of the world from that upbringing. She felt she was more oppressed than cared for so recognizing and trying to heal from that was work. Work that many of us are familiar with in different ways that shows up in various relationships in our adult lives. Motherhood is one of those ways it shows up.

Can adults and children deschool together? Aja and her son are in transition mode from homeschooling to deschooling because in addition to deschooling herself, she has decided that her son is going to as well. It felt contradictory not to do so, she felt like she couldn’t do both. She needed her son to think differently, to think for himself and shared examples of this here in this podcast.